“What’s good about all these ‘pairs’ of Briglin tiles is that they are all different, which lends support to my theory that they weren’t done in multiples but were rather ‘one-offs’ done when the ‘production line’ closed at the end of the day. ” – Adrian 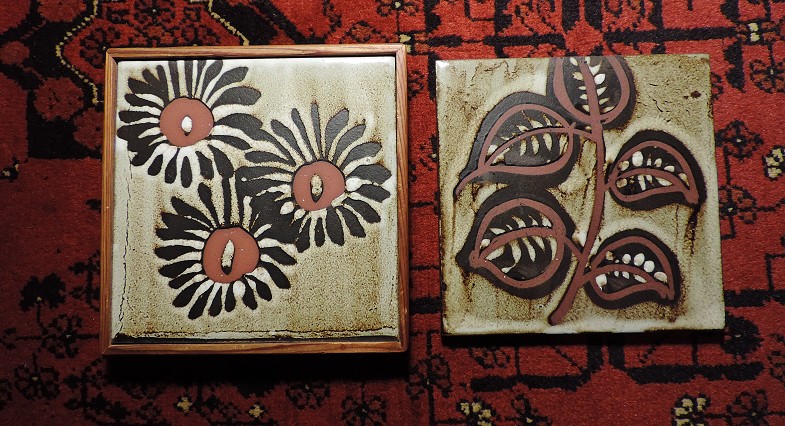 Description – 150mm x 150mm. A three coloured Briglin flower tile. Cream-brown glaze, black and the bare red clay are visible. A typical Briglin ground of white glaze over black manganese oxide which when fired allows the black to coalesce with the over glaze resulting in a creamy brown flecked surface, with interest and texture. On the tile there are three flowers, wax resist petals in black ans a central O to each flower in contrasting plain red clay – without any coloring. Surrounding the tile is a 8mm pine trim and it is rebated and backed with hardboard. Sadly no marks on the rear. This one has had strings attached to allow wall hanging, probably by the owner not at Crawford Street. This tile was probably created as a trivet. Intended for a hot tea pot. Oddly the pine surround extends a few mm above the tile. I’m thinking Daisy was one of the 60’s patterns and early, however this could be 70’s . I am unsure…but this tile probably dates as the second tile. Late sixties for Daisy is about right.

Description – 150mm x 150mm. A three coloured Briglin flower tile. The ground is cream-brown, and the five leaves are a mixture of black oxide with the red clay stems. Produced with the wax resist technique briglin is famous for. On the reverse are the PILKINGTON /CARTER marks;

I can only call this a five leaved plant with a single central stem. Similar cream-brown ground as the first tile. Perhaps a rubber plant. Not knowing about the blanks of PINKINGTON/CARTER only being produces between 1964-68 I would have suggested that this tile was mid 70’s but it seems unlikely that they bought a ten year supply? I have to assume that this tile is late sixties. So ENGLAND? 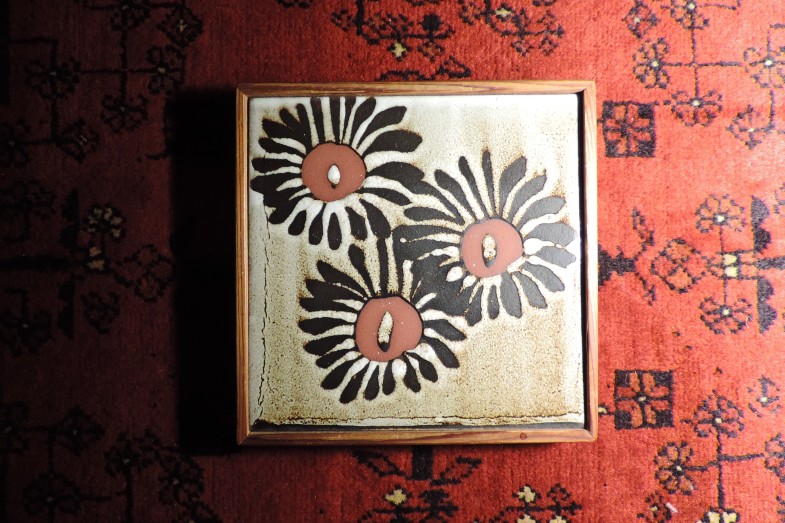 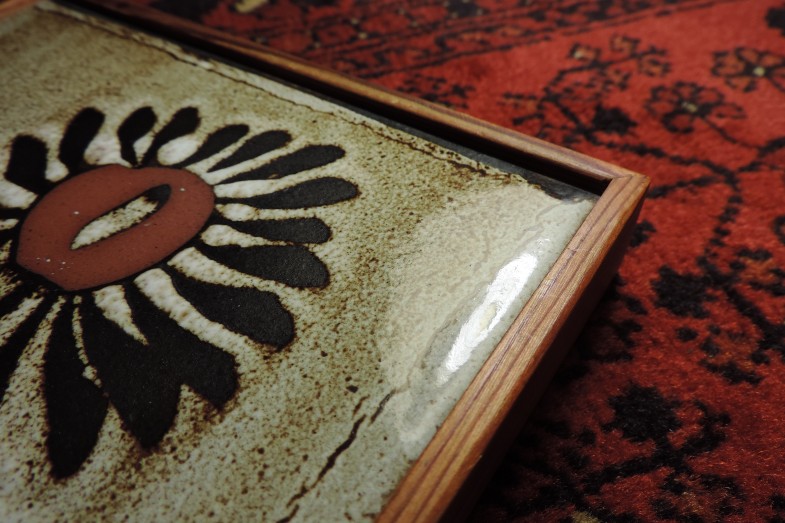 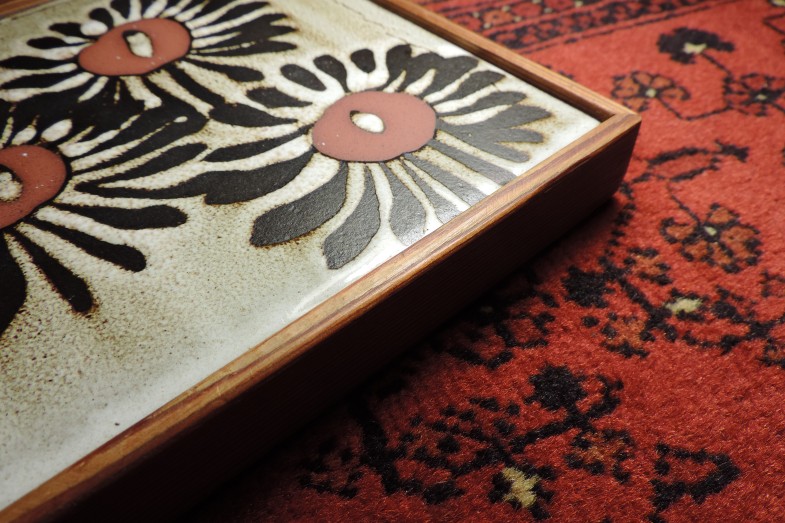 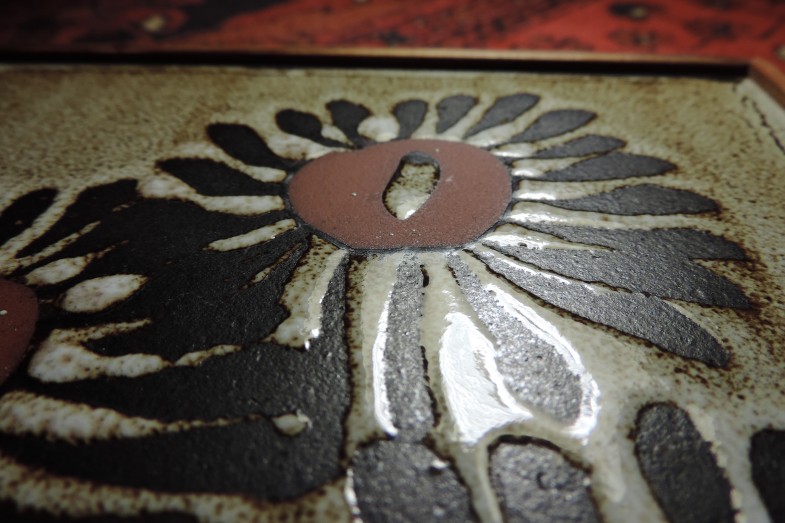 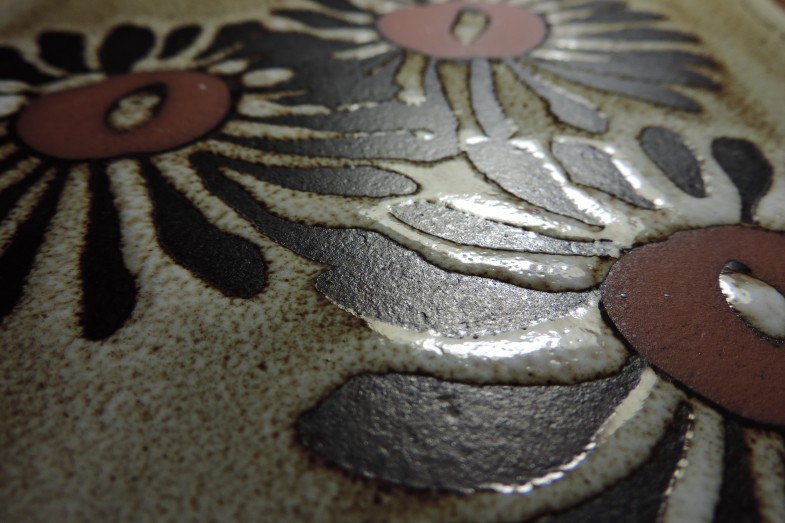 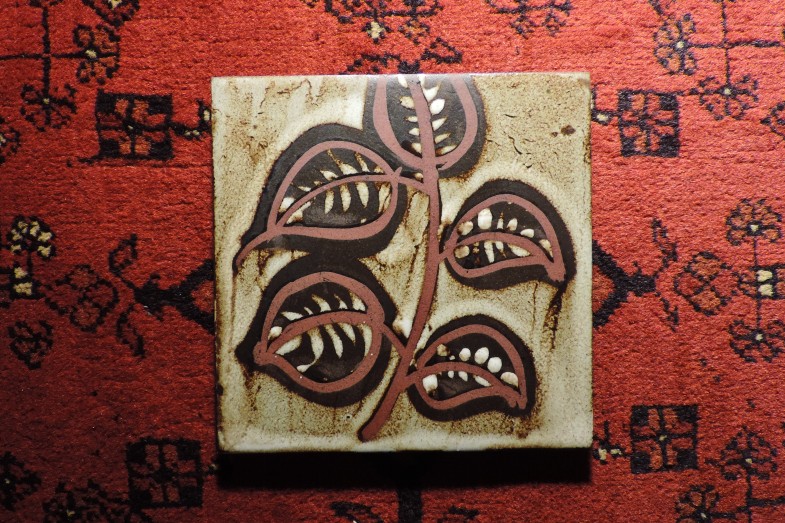 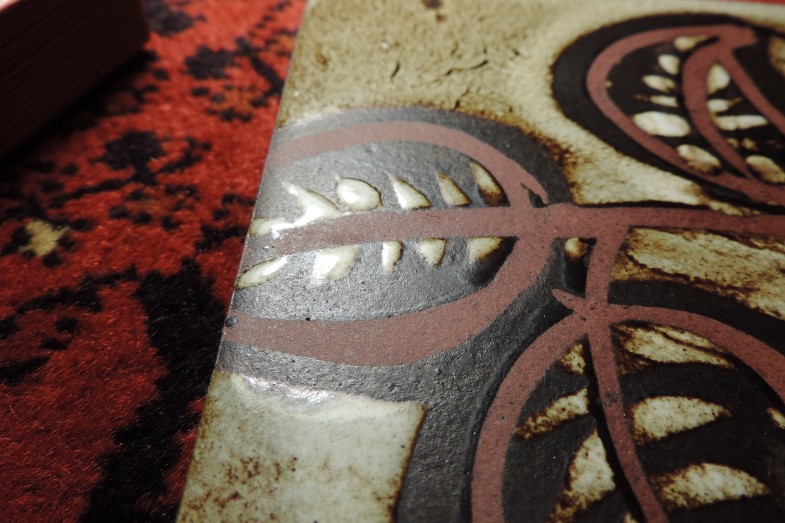 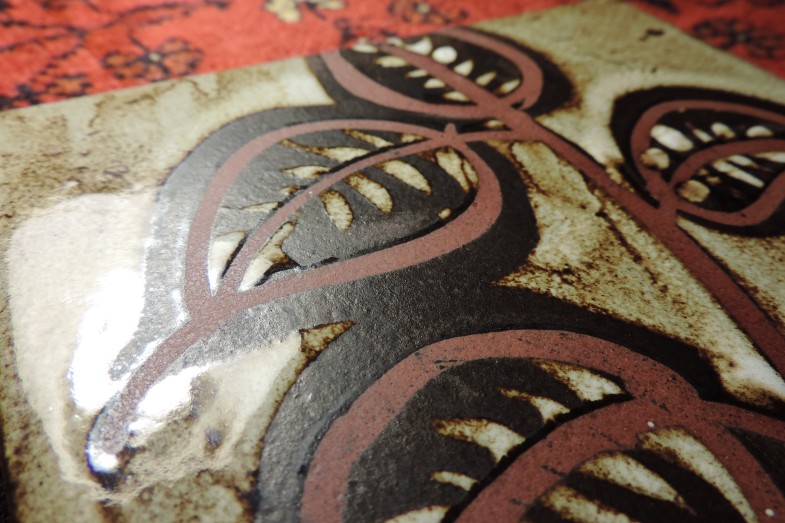 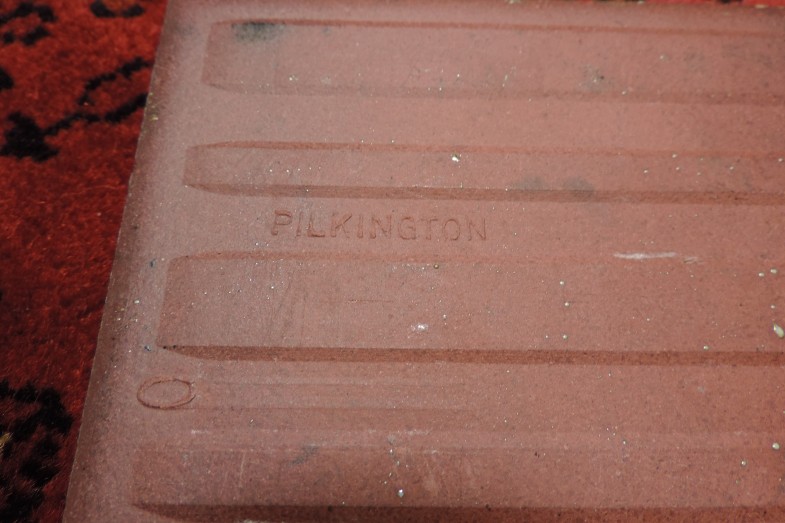 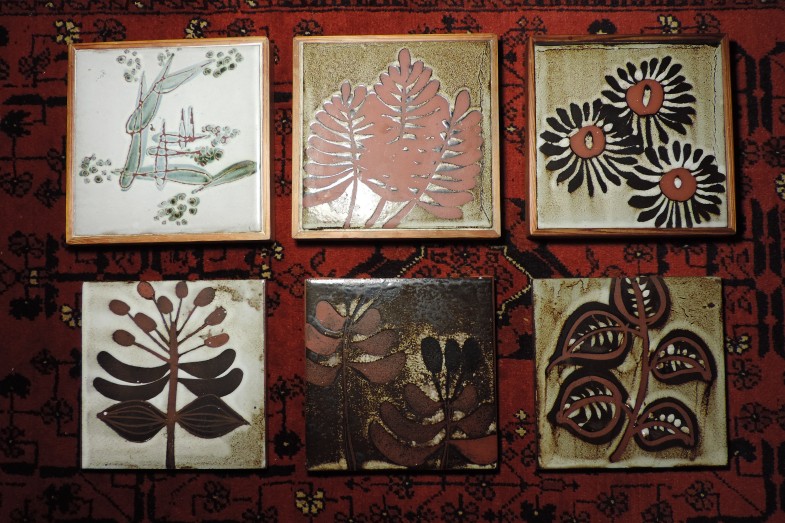 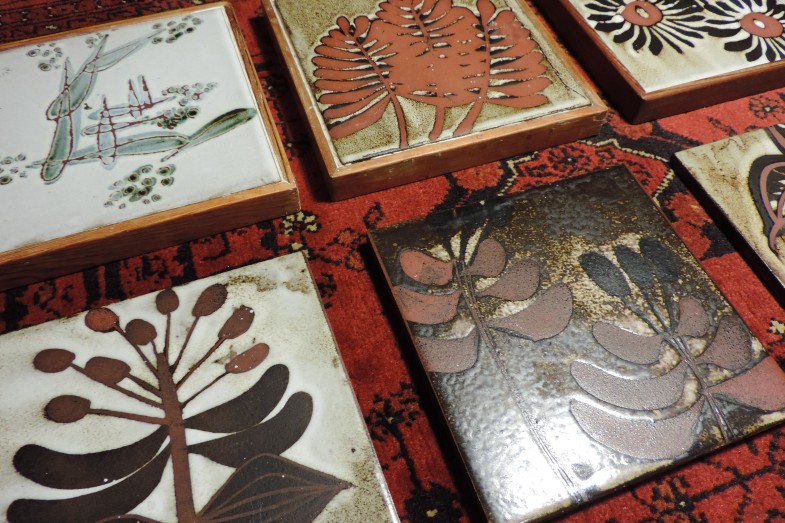 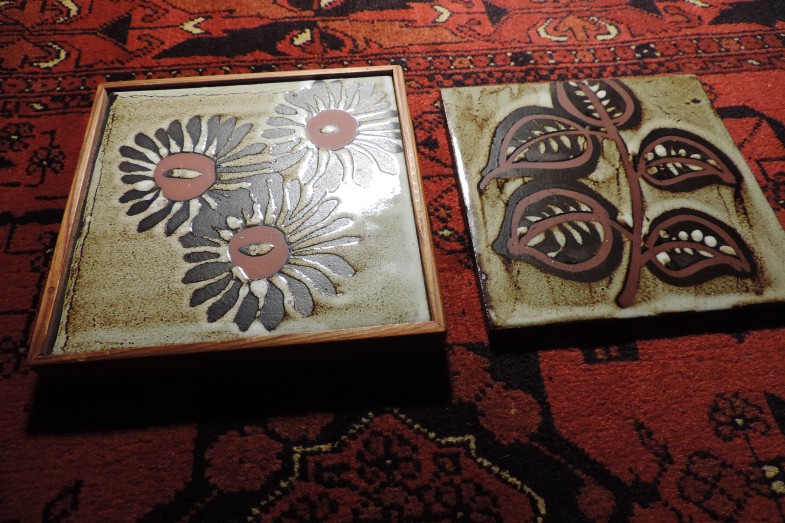 Help! – What do you think? Which way up?

Tiles – I included the following four photos as I’m unsure which way up this tile should be displayed. It’s safe to assume that most tiles are decorated by a right handed person. When I look at a tile I can generally tell which way up it was painted by the way the marks were made. Imagine decorating the tile with a brush, your hand moves in a certain way and it is possible to understand this. The left hand would steady the tile and your right hand would move move in concave arcs. So for example the daisy tile photo below  is the correct way up for that tile, but the photograph above this text has the daisy tile on the left rotated 90 degrees clockwise, it just looks wrong (sorry).

This tile is the correct way up for  right handed person. 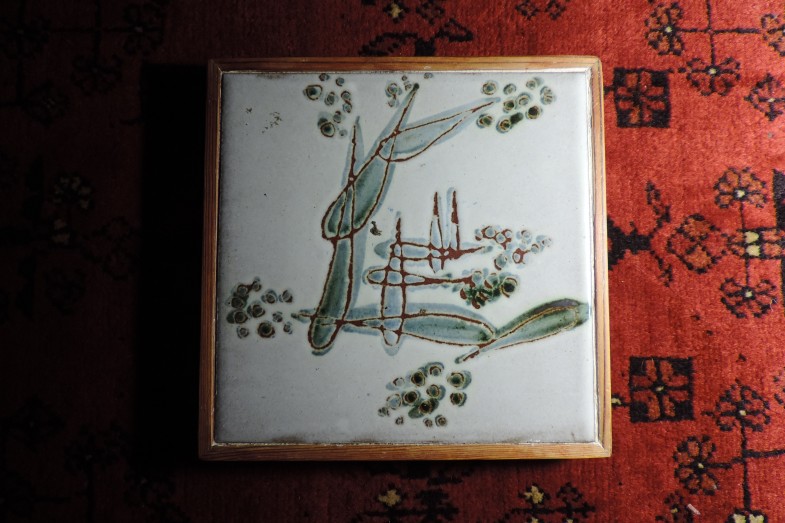 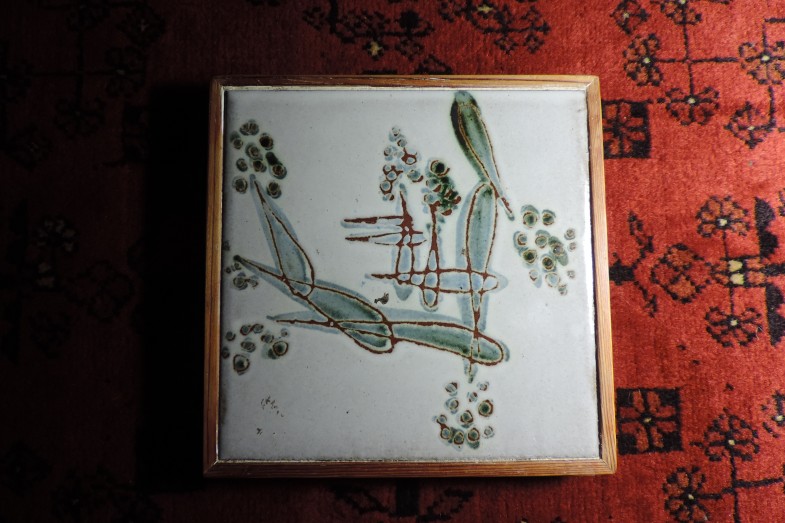 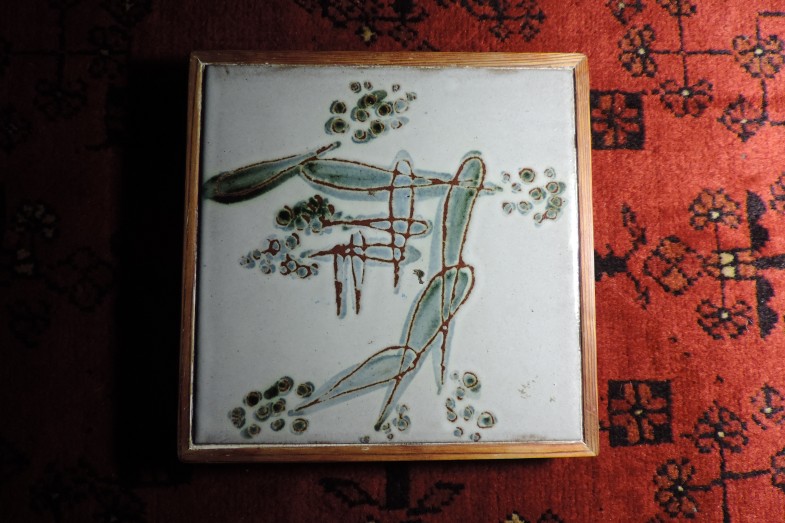 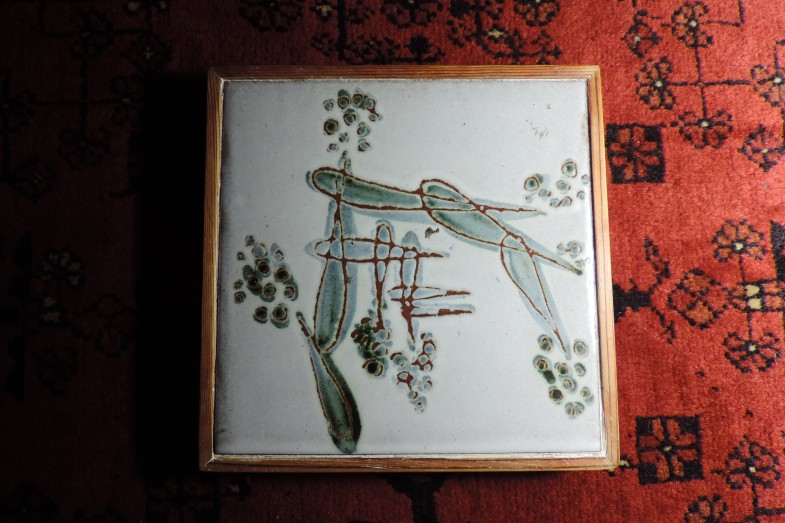 So for me it’s a choice between Photo 1 and Photo 4. I suspect that this tile was rotated when it was decorated making it impossible to understand which way is up.

I have also mirrored the images and they start to look a lot better meaning I’m tending to thinking it was perhaps decorated by a leftie?

One very last point – how were these stacked in the kiln? Were they laid flat?