These photos are from a visit to Baker Street in 2008 when I was working in the area. The two homes of Briglin Pottery are 66 Baker Street and 22 Crawford Street both in North London.

There Area of north central London where both locations were is known as Marylebone. Is is a surprisingly upmarket area for the location of a light industrial process like a pottery. The map of west central London. Both shops are north of Hyde Park in Marylebone which is east of Paddington Station.

Here is the street map and tube map of the area with both shops marked. 1) 66 Baker Street was not strictly speaking a shop as there was not a showroom until the move to 2) 22Crawford Street.

W1U 7DJ – The basement of 66 Baker Street was the original home of Briglin until the move to Crawford Street. The ground floor is now a restaurant; Glavins, a classy French Style Bistro. I assume the basement is now a storage area or even a kitchen for the restaurant. I can only assume that in 1948 the entrance was shared.

With google you can now look at the surrounding streets. Click on the link then ‘street view’, click the arrows on the roads to move about.

“In a very short time they had cleared, repaired, painted and equipped the 100 feet long space at the bottom of the dark and dingy stairs. At the front was a packing room and a small office; the pottery beyond was light and seemed quite spacious. The one wheel was a stand-up electric Britannia, the kiln an electric Catterson Smith. They used commercially prepared white earthenware, brought down from Stoke-on-Trent and stored in the back in the ‘clay cupboard’, where it was covered and watered, making the whole basement smell of damp and mould.”

After an interesting email from Rainer Goldsmith I realize that the 66 Baker Street shop in not as it was in the 1950’s. The Georgian terrace which the original Briglin has housed in was demolished and we now see a modern replacement. I have worked on two of the buildings in this area and I’m full aware that the Local Planners are extremely strict at maintaining the character of these streets. Which is a good thing. Too bad for 66 which has been lost to progress. I’m assuming that the original street would have looked much like Gloucester Place. See the link below for a Google Streetview link.

W1H 1BX – is now a dry cleaners. Crawford Street is a side street to Baker Street and there is more of a community feel to this small row of shops. It seems a more fitting home for Briglin. I am interested that they opened up the vents in the street to exhaust the heat and fumes from the basement when the kiln was being emptied! Health and safety would have a fit! Rosemary Wren (AA p. 73) is correct that there is no real place for the commercial pottery business in the centre of London. The planners would consider the industrial process of potting ‘incongruous’ with the local area and it’s unlikely they would approve the change of use in today’s modern world.

“We would fling open the glass-blocked pavements hatches to allow the heat and the burning-off wax fumes to escape into the street. We underground workers would gain a glimpse of the sky and legs of pedestrians, while they, in turn, could peer down on to the wedging and weighing-up bench below and, during the winter, warm themselves with the up-draught of escaping heat” (AA p.37) 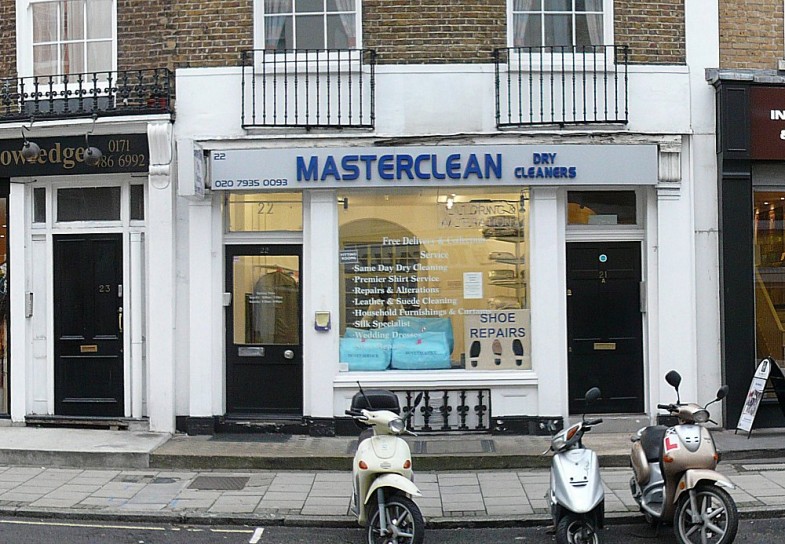