This is an article about the seven Parkinson/Briglin special edition figures released in 1959. They were sold under the Briglin banner but they are really Susan Parkinson figures branded with the Briglin name.  Unfortunately they are not on permanent display at the V&A.

The Victoria & Albert Museum have photographs on their website of five of the seven special edition figures produced in 1959 in the tradition of Staffordshire pottery. The actor Herbert Lom, the partner of Briglin’s Brigitte Goldsmith contacted seven stars of the period:

All kindly all agreed to feature. Lom wrote a leaflet advertising the proposed edition of x100 figures of seven famous personalities, with their quotes expressing delight.

Since Briglin’s earthenware proved unsuitable, Lom commissioned Richard Parkinson to design and make them at his pottery from continental-type porcelain, fired at high temperatures and decorated in green and black. The slip-cast figures proved tricky; the moulds had to be made in several pieces and most of them, except Paul Robeson and Vivien Leigh, had to be tall and thin, unlike the rest of Parkinson’s pottery. After Robeson, the fifth model, the Parkinsons realised their charge of £2 a figure was unrealistic. Since Lom refused to raise the price, the project was terminated and only about 6 figures of Robeson were made. In 1959 however the set featured in London’s Design Centre where Briglin sold them for 10 guineas each, and 40 guineas a set. The Duke of Edinburgh and Charlton Heston each bought a set. Each of these figures are approximately 300mm high.

All the figures carry the hand painted description inside the base;

I found these links whilst searching the internet. They are very interesting. Someone had a good day! Below is a link to Christies the auctioneers who sold three of the figures in 2000. They went for very low amounts. They considered them important enough to sell them individually, but Christies normally do not get out of bed in the morning for this sort of money! – 26 October 2000 – See LOTS #202 Sir Laurence Olivier, #203 Vivien Leigh & #204 Sir John Gielgoud 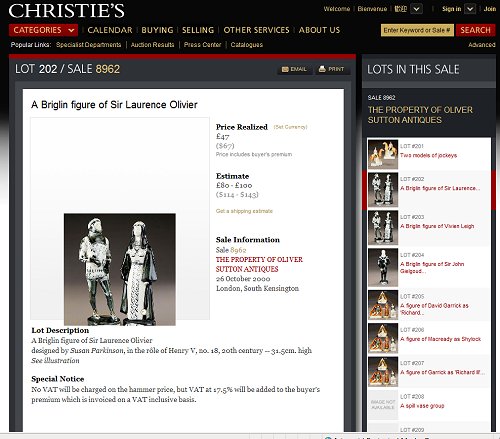 Susan Parkinson Figures sold in 2000 at Christies for a very low value.

Steven Moore met this woman who brought in five of the figures to the Antiques Roadshow BBC TV programme in 2011. Unusually she had one of the Paul Robeson Othello figures which proved unpopular and few were made so thy are the rarest of the seven.  He valued the set of five at £8,000 – £10,000 together, but seeing others for sale in 2013 this might be a bit high. A similar set of x5 went for £5000 in 2012 on ebay but one of the figures was damaged. Strangely the Paul Robeson figure was numbered No.11 which contradicts the V&A description that only six were made.

Blair Castle 2 is no longer available on BBC iPlayer

See the link here in the forum for photographs of one of the Parkinson figures recently sold through Briglin.com. After a while we did help find a private buyer for this piece and all went well. If anyone else is in need of help selling items then please contact me. I can certainly assist with buyers/sellers without time constraints. 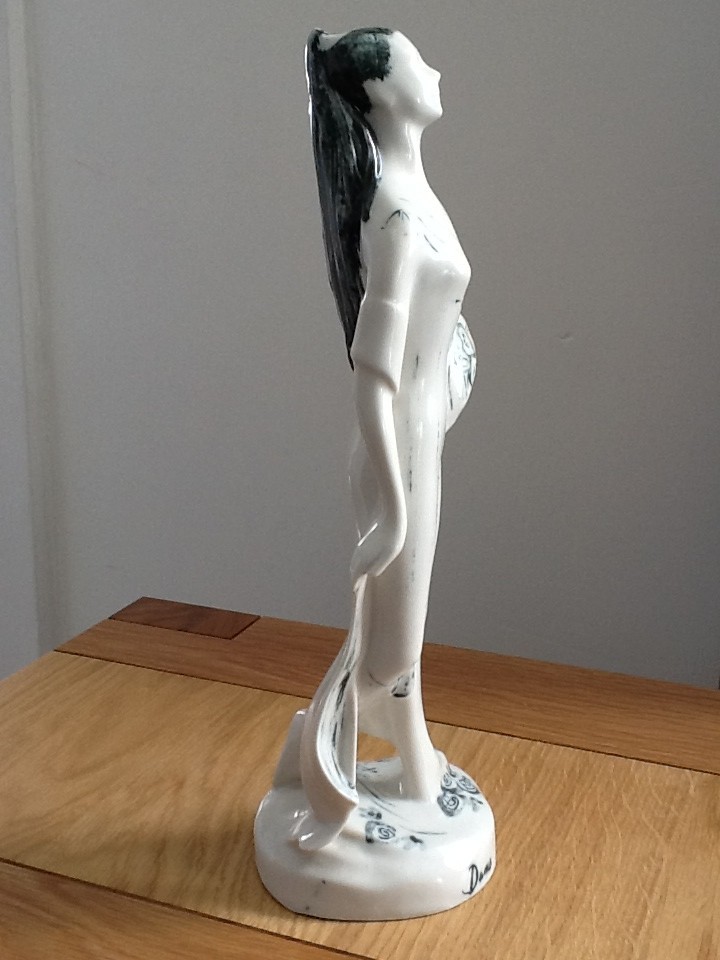 Dame Margot Fonteyn, as Ondine – SOLD Privately through Briglin.com in 2013

The full paragraph quoted from the V&A description;

In 1959 Briglin Pottery, makers of decorative domestic earthenware, decided to revive the Staffordshire tradition almost extinct since the 19th
century of making pottery figures of outstanding theatrical personalities of the day. One of the founders of Briglin was Brigitte Goldmith whose
partner was the actor Herbert Lom; he made contact with the personalities they wanted to feature. These were Sir Laurence Olivier as Henry
V, Vivien Leigh as Cleopatra, Sir John Gielgud as Hamlet, Dame Margot Fonteyn as Ondine, Paul Robeson as Othello, Maria Callas as
Violetta and Alec Guinness as himself. Briglin planned a limited edition of one hundred figures of seven personalities. Lom wrote a publicity
brochure, with quotes from the actors saying they were delighted to be included, and that the tradition was to be revived.

Since Briglin couldn’t provide the bodies themselves, because they used an earthenware body that was unsuitable for such detailed work, Lom
who lived near the Parkinsons in Kent, commissioned the Parkinsons to do the figures for £2 each. The figures were devised by Richard
Parkinson, slip-cast from continental-type porcelain, fired at very high temperatures and decorated in green and black by Susan Parkinson.
The figures were tricky to produce; the moulds had to be made in several pieces because the figures were very detailed and because most of
them, apart from Paul Robeson and Vivien Leigh, had to be relatively tall and thin, quite unlike the rest of the Parkinson’s pottery. Vivien Leigh
was the second to be made, and Susan Parkinson said it was difficult to produce a realistic model in terms of height that would appear to be a
set together because Paul Robeson was very tall and Viven Leigh very petite.

After having made the fifth model the Parkinsons realised that they could not continue to make them for the agreed price. Since Lom was
adamant about a price increase, only the first five were made, and only about six of Robeson. Despite the termination of the project the
figures were displayed in the Design Centre in 1959 where Briglin sold them for 10 guineas each, or 40 guineas for the set. The Duke of
Edinburgh and Charlton Heston bought a set, and Brigitte Goldsmith presented the figurines of Vivien Leigh and Laurence Olivier to her
personally. Although not wanting the Parkinson Pottery’s name to be associated with the figurines, they were allowed to mark them inside the
base which was brushed with a band of colour on the white clay and scratched through: ‘Made for Briglin Pottery by Susan Parkinson.’