Briglin Pottery produced a series of ‘Standard’ patterns which were mostly based on nature or strong geometric patterns. They formed the bulk of  production over the years and they  are the main the designs that Briglin is known for simply because there is so much of them about. The standard patterns are not Briglin’s best work, they were a known quantity and could be reproduced and reordered by a re-seller such as Heals. Brigitte changed the ranges as new patterns replaced unpopular designs. In general the standards are ‘Late’ designs, dating from 1970’s and 80’s. The exceptions to this are probably scroll and daisy which I believe were being produced in the 50’s and 60’s respectively.

I’ve tried to put these in rough chronological order. The early patterns first. Please note that this list is not full developed and should be considered work in progress. See AA p.62-63 for more information. The book points out that in 1977 the patterns were: fern, honeysuckle, scroll, sunflower and thistle. So they were running with x5 patterns. There are other re-occurring patterns, such as the early dots of yellow / green or the black and white Briglin vases but they seem not to have been produced in great numbers. If I had to put them in order of production the first two would certainly be scroll and then sunflower, these are very numerous. Third would perhaps be daisy but it’s not even close to scroll and sunflower in volume produced.

Note: The images below link to photos of the respective pattern.

This is the early standard pattern stripes in my name for it and I’m thinking that it’s not mentioned in the book? It is only on a white clay base so it must be early. See AA page 26 – 27. Dates unknown but it’s 50’s. It’s very plain and no one is going to get excited about this one.

Technique: The face of the piece is scribed with many parallel wax lines approximately 5mm thick and 3mm apart. The white glaze has a feint blue green colour. It’s fired and the wax burnt off and the glaze is where the wax is not. It is then washed with the black oxide and re-fired to five the face the black and white stripes. There is none of the base white clay showing through except for the base.

I’m not taken with this design, based on the bare earthenware clay, black manganese oxide and a browned white ground. It did mature over time but I still find it a little dull. The book points out (AA p.63) that not only was it popular but it was simple enough for the junior decorators to start on.

Technique: Absolutely standard. The radiating swirl is painted in wax and often as below other areas are blanked out. It’s glazed in white. The wax burns off. The the black oxide is applied. The is a certain amount of speck of black on the white and the ground is very browned.

I’m thinking that this is daisy and that it was perhaps produced in the 60’s where all the others were 70s patterns.

Technique: After bisque firing the whole daisy pattern is waxed out. The piece can then be fully glazed with the white underglaze. The wax burns off, the petals can then be painted with the black manganese oxide and re-fired. In the end daisy is composed of three colours; the red earthenware clay, manganese oxide black and a creamy brown / white base.

Not sure on this one. Again no confirmation. No pictures of this one in the book. I’m assuming that it was unpopular as you don’t see that much of it. Not one of my favourites. I’m thinking I only have one jam pot.

Technique: Dead simple, the black oxide is painted directly onto the ground.

Sunflower adorns the cover of the Briglin Pottery by Athena Arnold. See AA p.60 for a small range of items. It was a popular pattern judging by the amount available on eBay. Again it is a simple pattern that could be decorated by juniors. According to the book (p.61) Sunflower was introduced in 1972 when Brigitte returned from Gozo (Malta). I should mention that it changes in colour. Some sunflower is almost burnt umber ground and other nearly white.

Technique: Typical, the whole sunflower is painted in wax including the stalk. The ground is glazed the off white colour. After the first firing the petals are painted with oxide to give the black. Item is then re-fired.

Another three colour pattern. The book lists this as only lasting for five years from 73 to 78. This does not tie in with the MCJ teapot I have as Michael left in 1971…. so something is incorrect, perhaps he left later that 71?

Technique: Paint a fern with wax on the bisque fired body and glaze and fire….simples!

I think this is twist.  See AA page 61. Strangely I like the strength in this design although again it is a simple geometric pattern that would not have been difficult.

Technique: Paint the twists with wax. Glaze the piecer with the white ground then re-fire with alternate twists decorated with the oxide. You just need to be sure there is an even number of twists.

Probably the most interesting pattern. it’s different from the others as this pattern seems to have taken much more work than some of the other designs. See the photo that was kindly sent to me by Richard Howland-Bolton at howlandbolton.com (Thanks for the permission to use the photo Richard). It’s a advertising picture from 1975. A B/W Photograph. It’s interesting to me how Briglin was advertised and how it was sold. What was being sold in other words. The font looks a lot more modern than I was expecting. I love everything about the image even the dried flowers in the carafe! It is far less common than the brown standards. The pattern changes very little, which makes me think that it was short lived.

Technique: I’m sure this would have involved more work. It seems that the thistle shape is partly painted with wax, but importantly not fully. The whole piece is then dipped in the underglaze giving a white ground. The thistle pattern is then over painted with greens and possible black glazes. This is all fired in one go blending much of the colours together. There remains some of the bare wax resist earthenware colour but it’s not clean as with the other patterns. it’s a technique that relies on the glazes blending but not running too much or the patter is obliterated altogether. 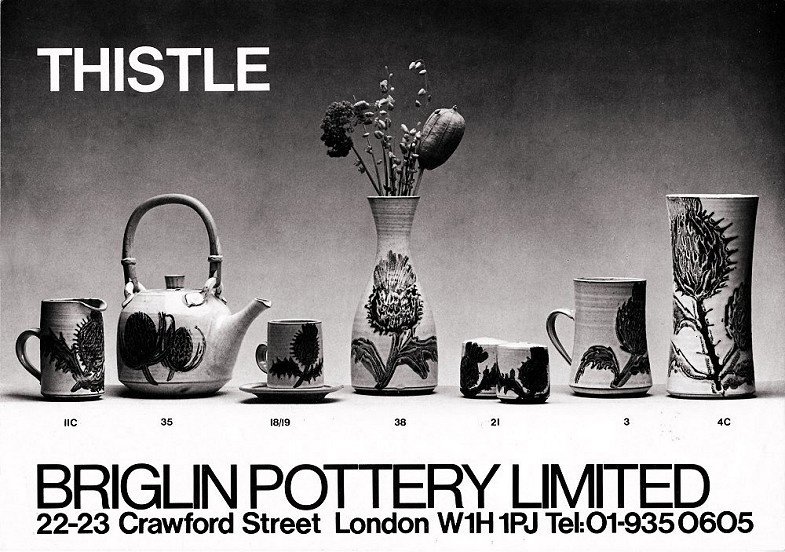 An later inscribed pattern. Again based on nature. Not very common. The technique produces some really nice textures linked with rich colours.

Technique: On this one the leaf shapes are scraped out removing part of the body. The whole body is then glazed with the white underglaze. Then the design is painted in a blue-green glaze and highlighted with black oxide. The overall effect give a lot of texture and depth.

Usually blue glaze brushed over  on a white field. Standard patterns were used on all types of items including the pig in have with lily decoration. Not one of my favorites as it’s would have been very simple and very quick. Very late and not very popular.

Technique: Here the blue pattern is decorated at the same time as the underglaze white. It’s a fast single firing pattern.

A late standard pattern.You see this mainly on goblets and vases. It’s uncommon.

Technique: The piece is usually underglazed white, then a leaf green glaze is brushed on, thinly in places and thickly in others creating light and dark areas. I believe the book mentions using a Japanese brush technique. After firing there are the ochre browns of the earthenware showing through.

I’m left with two patterns, from the book one called ‘autumn’ and one called ‘willow’. I can only assume that the pattern I call ‘tree’ is ‘willow’ and the pattern I usually refer to as ‘apple’ is in fact ‘autumn’ – the descriptions seem to fit. You can make up your own mind by reading AA.p.63.

One of the later patterns this represents the fading plants of Autumn that can be found in nature (I’m assuming that this is the pattern I called apples).

Technique: This is another brushed pattern. White underglaze with browns and green apples or fruits (peaches?) with leaves. There is often greens & browns painted to the base also so the ground is not normally pure white but flecked with colours. Fired once after decoration.

One of the nature patterns, it reminds me of Clarice Cliff patterns before the war. It’s a little strange for Briglin as it is quite confined and regimented leaving very little room for movement. It does not seem to have been that popular and is not very common.